Bitcoin has chosen violence. The first crypto by market cap trades at $57,873 with a 3% loss in the daily and an 11.2% loss in the weekly chart.

After making a push close to $60,000 Bitcoin was rejected and has trended to the downside for the past 2 hours. The benchmark crypto might have reacted to the potential re-appointment of the U.S. FED Chair Jerome Powell to his position for a second term.

Data from Material Indicators suggest the move to the upside was driven by investors with orders with an estimated value above $1 million (whales). As seen in the chart below, these investors, along with retail investors and others with bid orders above $1,000 sold as soon as BTC’s price reached $59,000.

According to data from Glassnode, the Short-Term Long Term Realized Valued (SLRV) for Bitcoin is back to below 0.4. As seen in the chart below, whenever BTC’s price hits these levels, the cryptocurrency tends to appreciate.

Pseudonym analyst On-Chain College commented the following on what this indicator suggests for Bitcoin in higher timeframes:

What I find most interesting is the relationship of this ratio between now and the run up earlier this year. Notice the SLRV Ratio rising as price rose in the beginning of this year vs. a steady decline/consolidation as price rose a few months ago… Bullish

Despite the recent downwards price action, Bitcoin’s fundamentals remain bullish. Additional data provided by Glassnode noted an increase in the number of addresses with an estimated balance above $0.

This metric indicates a rise in adoption most likely triggered by the approval of the Bitcoin Law in El Salvador and the growth and its second-layer solution Lightning Network. Since BTC’s price made a run from its yearly open ($29,000) to an all-time high ($69,000), the market became overheated.

The approval of the first BTC-linked ETF in the U.S. didn’t contribute to the above with the derivatives sector recording an increase in positive funding rates. This metric has returned to a neutral state after BTC’s recent crash.

However, experts believe that BTC still needs to flash out the short-term holders and speculators before re-entering price discovery. NewsBTC’s Editorial Director Tony Spilotro expects Bitcoin to retest support around $56,000 in the short-term following a similar pattern that in September before BTC broke away from a previous range and above $65,000 for the first time since its inception. 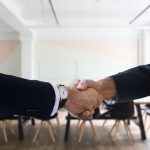 How Social Platform Chingari is Using Web 3.0 to Transform the Traditional Way We Use Social Media: Author – NewsBTC