Michael Joseph Jackson, aka the “King of Pop”, is one of the most significant cultural figures of the 20th century. Over a four-decade career, his contributions to music, dance and fashion made him a global figure in popular culture. Jackson influenced artists across a variety of musical styles, and through visual presentation. He popularized complicated dance moves such as the moonwalk and the robot. Jackson is the most awarded music artist in history.

A little-known fact was his incredible talent as a wax pencil and pastel artist. In addition to the above, Michael portrayed Presidents George Washington and Abraham Lincoln.

The entirety of his collection was bequeathed, by Mr. Jackson, to his close personal friend and business partner, Sir Brett Livingstone-Strong. 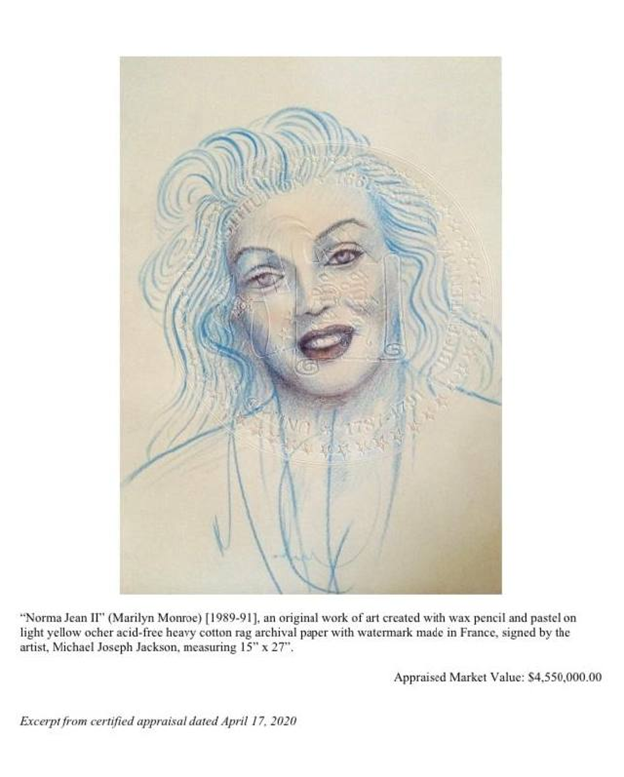 This Giclee Portrait of Marilyn Monroe, entitled Norma Jean II, shown here, is owned by Mike Visser, who acquired the giclee, among other enchanting pieces of work by Mr. Jackson, in a series of private business transactions with Livingstone-Strong over a course of several years (dating back to 2016)

Sir Brett-Livingstone-Strong is an Australian-born artist, best known for his historic monumental sculptures and portraits of Hollywood celebrities.

The Jackson-Strong Alliance was a creative partnership between Michael Joseph Jackson and Brett-Livingstone Strong. Their aim was to establish the world’s most dynamic arts enterprise, promoting the power of imagination, not just for creativity’s sake, but for the sake of important world causes. Michael and Brett focused their creative expression in support of the arts, international charities and protecting the environment of our planet.

The enchanting portrait of Marilyn Monroe is only one of three giclees in existence. The original was appraised for over $4.5 million. The Husl.io and Visser in a partnership are selling the digital NFT of this giclee for 277 Ether, which is worth approximately $944,500 as of September 14. The purchaser will also receive the physical giclee as well.

The auction date is to be announced and will be several days after the launch of The Husl.io Platform. Part of the proceeds will go towards powering the new NFT market ecosystem built by musicians for musicians.

The Husl.io is an ecosystem and NFT market built by musicians and for musicians which is set to disrupt the legacy music industry. The team behind it believes that fans should empower their favorite artists by owning music and participating in unique moments in history.

Only 12% of the music industry’s international revenue goes to artists, writers, producers and creatives. 88% of the revenue generated by the music industry goes to lawyers, executives, distributors, streaming platforms and corporations. That’s the problem. Fans are profoundly limited in the ways they can support the artists they love and believe in. Buying records, streaming tracks, attending concerts – these actions, while fundamental revenue sources for musicians and music bureaucrats alike, fund the industry more than the artist. Fans simply don’t have an opportunity to directly invest in artists.

The Husl.io is using blockchain technologies to radically reorganize the entire international music economy and prioritize the industry’s key players: the creatives and the fans. Blockchain, and cryptocurrencies like Bitcoin, are challenging national banking systems in the same way The Husl.io is confronting the institutional giants of the music industry: both blockchain and This innovative platform are deconstructing deep-seated, centralized systems of power through transparency, diversification, and grassroots transactions. What does that mean?

A blockchain economy is controlled democratically, by the decisions of individuals, not by the will of a handful of lobbyists, billionaires and politicians printing money to suit their needs. Likewise, an artist’s success will no longer be determined by a handful of wealthy music executives pumping cash into their pet projects and burying emerging talents. The Husl.io is bringing democracy to music and letting fans elevate the artists they believe in. They are giving artists the tools they need to connect directly with fans, and we’re putting the success of artists back into the hands of their fans. Artists with massive support from single investors will take a backseat to artists with diverse fan platforms because true success is grassroots.

*Giclee is a technology for fine art or photograph reproduction using a high-quality inkjet printer to make individual copies. A giclee also refers to a print produced using the giclee process. Cardano (ADA) Breaks $2 For The First Time Since May, Why New All-Time High Is Imminent: Author – Best Owie Orion Protocol Establishes the First and Only Decentralized Gateway to the Entire Crypto Market: Author – NewsBTC