The great Bitcoin miners migration is well underway. And the network’s total hash rate is showing it in a big way. Currently, the number of terahashes per second is at its lowest level in the last twelve months. That means that mining Bitcoin has not been easier in a whole year. Also, there’s less competition. So, it’s good news for all the other miners that are spread around the world. However, don’t expect it to last long.

Tons and tons of mining equipment are currently traveling to their new homes. There are reports of a huge operation in Kazhakstan, a neighboring nation of China. There are also rumors of equipment and personnel already settling down in Texas. The US state is making a push to become a Bitcoin mining capital, and apparently, the efforts already bore fruit.

Back in China, the crackdown is no longer a rumor. It’s a reality. CNBC reports:

China’s crackdown intensified over the weekend, with authorities in the hydropower-rich Chinese province of Sichuan ordering crypto miners to shut down operations.

According to reports, more than 90% of China’s bitcoin mining capacity is estimated to be closed.

Some experts see this as a good thing. It’s estimated that China controlled between 60 and 70% of Bitcoin mining, and the future looks clearer with them out of the picture. The hash rate will suffer for a while, but there’ll be more decentralization. Also, the carbon-powered-energy consumption FUD will decrease. Even though China’s miners were mostly located in areas rich in renewable energy, Bitcoin critics had a hard time believing reports from that side of the world.

Another China Ban, A Reflection Of 2017

This is not the first time that the Chinese government’s cryptocurrency policy caused havoc on the market. In September 2017, they banned crypto exchanges altogether. Just before that, Bitcoinist reported:

While Chinese exchanges used to represent over 90% of Bitcoin’s trading volume, this changed completely with the intervention of the PBoC which led to the end of margin trading and zero-fee policies and to the temporary halt on withdrawals.

All of these changes contributed to China’s trading volume reduction, which saw its market share fall to 3-5% of the global trading volume.

So, historically, the Chinese government has shown no mercy in closing billion-dollar businesses by decree. It’s also worth noting that most of the banned cryptocurrency exchanges just closed their China offices and moved their operation to other countries. They continue working to this day and, for users not in China, the traumatic move didn’t affect their experience in the slightest. Bitcoinist reports again:

The clampdown led to a staggering drop in CNY trading — which comprised over 90 percent at its peak — as traders made an exodus to over-the-counter, peer-to-peer, and foreign exchanges. As a result, jurisdictions with friendlier laws experienced a boom in trading volume as the market flipped on its head

The current situation with the miners is a reflection of that. The mining business is in the process of flipping on its head. The hash rate will recover. 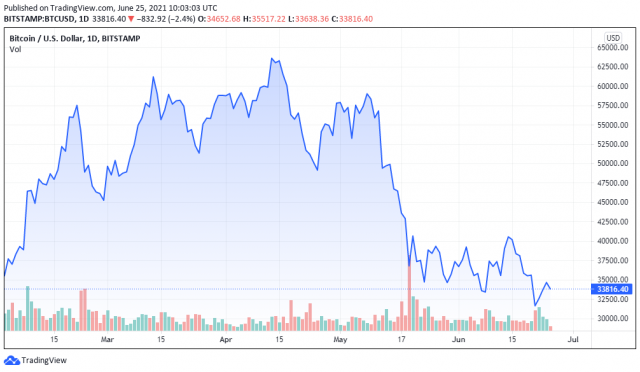 The Hash Rate Will Rise Again

In retrospect, we should’ve seen it coming. Only two months ago, following a suspicious blackout, NewsBTC reported:

According to the Beijing Economic and Information Bureau, there were concerns about the energy consumption related to these activities. PengPai quotes Yu Jianing, rotating Chairman of the Blockchain Special Committee of China, to claim that the country’s environmental requirements could lead to crypto mining being more “strictly regulated”. Jianing said this will be “inevitable”.

As for the possible reasons, Bitcoin Magazine’s Lucas Nuzzi cites the upcoming Digital Yuan CBDC. He also defuses the FUD by informing us, “Daily Hash Rate is, by its very design, a volatile metric that is not suitable to track lasting changes in the mining landscape.”

We should also take into consideration Nic Carter’s assertion that all of these things are happening while, “Bitcoin continues to maintain 100% uptime, is nothing short of a modern marvel.”

In Bitcoin, everything’s changing while everything stays the same. The hash rate will rise again.