Bitcoin has been consolidating over the past week, with the selling pressure at $16,000 so far proving to be too much for its buyers to handle.

Until this level is broken above, bulls may be plagued by underlying weakness, and it may see a prolonged consolidation phase.

This consolidation could favor altcoins, and many are already catching major upwards momentum while BTC stagnates – especially those within the DeFi sector.

One analyst explained that Bitcoin is now testing a key parabolic trendline. It is imperative that this is defended, or else it could bear witness to some major downside.

At the time of writing, Bitcoin is trading down just under 1% at its current price of $15,200. This marks a notable decline from daily highs of $15,500 that were set overnight.

Since reeling down to lows of $14,800 yesterday morning and rebounding back above $15,000, the cryptocurrency has primarily been consolidating.

Until it can break this consolidation phase and rally higher, attention may start drifting towards altcoins.

Today, Yearn.finance’s YFI token and many other so-called “blue chip” DeFi tokens are trading up, with many seeing parabolic momentum over the past week.

One trader explained in a recent tweet that it is imperative that Bitcoin guard against seeing any further downside in the mid-term.

He noted that the crypto is currently testing a parabolic trendline that has been formed throughout the past several months.

“BTC is trying to form an ascending triangle while testing parabola support.” 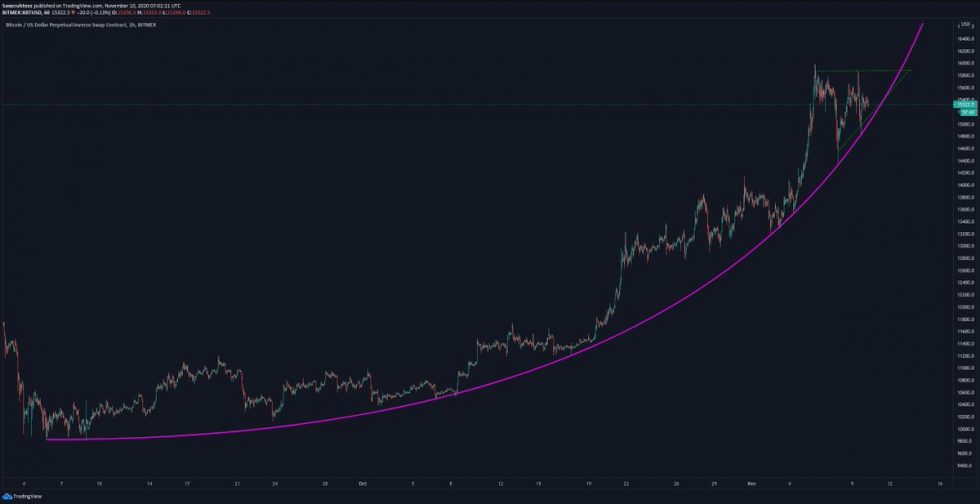 If this trendline continues being defended in the near-term, it could help catalyze significantly further momentum. A break below it, however, could be dire for Bitcoin’s near-term trend. Litecoin Trading Above $108, Its Highest Level in 17 Months, Up 23% This Month: Author – Siamak Masnavi