Some think the coin will resume its uptrend soon. But according to order book data shared by Cole Garner, a crypto-asset analyst, a medium-term top may be in the midst of forming despite the bullish expectations of some.

Garner shared the chart below on October 28th. It shows Bitcoin’s price action over the past few months along with order book data overlayed on the chart.

This data suggests that the cryptocurrency is likely reaching a trend high and may see a reversal as it did at the end of August and the start of September. This chart does suggest that Bitcoin has room to rally, potentially towards $15,000, but it also implies that a correction will eventually be had.

Bitcoin’s recent weakness only adds to the potential that this plays out.

The leading cryptocurrency has been weak over the past few days as a result of a correction in the S&P 500, which is down 3% on Wednesday alone. This is the greatest daily loss in many months for the leading index. 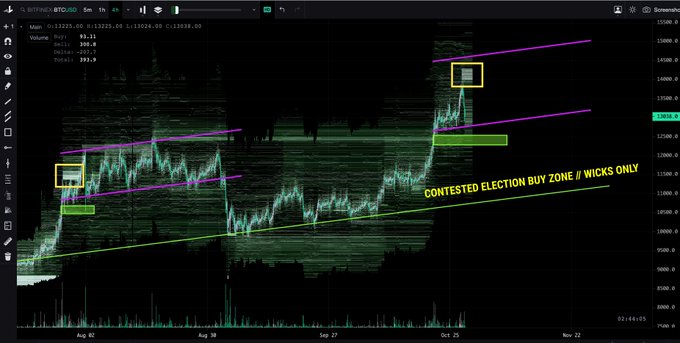 One analyst said that Bitcoin’s weekly close above the “strong resistance” of $12,000 will trigger a move towards all-time highs. As reported by this outlet previously:

“keeping it simple here with $btc, the weekly chart looks phenomenal. now firmly above all downtrends from the 2017 20k top and this week just closed on its highs above key 12.5k resistance. the sky is the limit now imo, and this market is not for shorting!”

Underscoring this positive sentiment is institutional and retail adoption of Bitcoin that is likely to drive the coin even higher in the long run. For one, corporate treasuries are buying Bitcoin as they look to hedge inflation risks. Retail investors, too, are expected to get involvement with PayPal and other firms launching crypto-asset support. Crypto Analyst Expects Bitcoin Price To Be Above $250K at Top of This Bull Cycle: Author – Michael Lavere