While BTC still sits below $12,000, analysts remain bullish as Bitcoin holds above another crucial level.

One crypto trader and chartist shared this chart amid the rally higher. It shows that since early 2018, that level has been of absolute importance to Bitcoin bulls, marking the highs multiple times in 2018, in 2019, and even earlier this year during the summer breakout.

Bitcoin will need to close above $11,828 on a weekly time frame if it is to confirm its macro bullish trend. That will be decided on Sunday evening, when the close comes in.

Analysts think that this is the start of a greater move higher.

Crypto-asset trader Josh Olszewicz recently shared the chart below. It shows that Bitcoin’s Ichimoku Cloud indicator recently formed a pivotal buying signal. This signal was last seen during the late-July rally that took Bitcoin from the $9,000s to $11,000 and beyond. 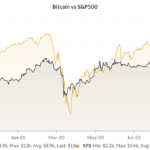 The Case For Bitcoin Decoupling From The Stock Market: Author – CFR