Bitcoin and the entire crypto market are continuing to lack any momentum, which is damaging investor sentiment and making it increasingly unclear as to where it may trend in the days and weeks ahead.

This certainly isn’t the first time the cryptocurrency has seen bouts of sideways trading this intense, but without fail, each one typically results in a massive swing.

That being said, it may only be a matter of time before BTC makes a massive trend-defining move.

Where it begins trending next may depend on progress surrounding the second round of stimulus in the U.S., as data shows that developments surrounding this are having massive influence over BTC.

Bitcoin Struggles to Gain Momentum as It Trades Around $10,600

At the time of writing, Bitcoin is trading up marginally as its price hovers just above $10,700. This is around the price at which it has been trading throughout the past few days.

Until any of these key levels are broken, its near-term outlook will likely remain unknown.

One analytics firm explained that Trump’s recent tweet regarding a potential round 2 of stimulus payouts to Americans marked the local Bitcoin bottom.

“Did Trump’s ambiguous update about the stimulus package signal the local bottom for Bitcoin? According to our data, BTC bounced off of $10.55k & has gradually climbed since this announcement that spiked stimulus discussion on crypto platforms.” 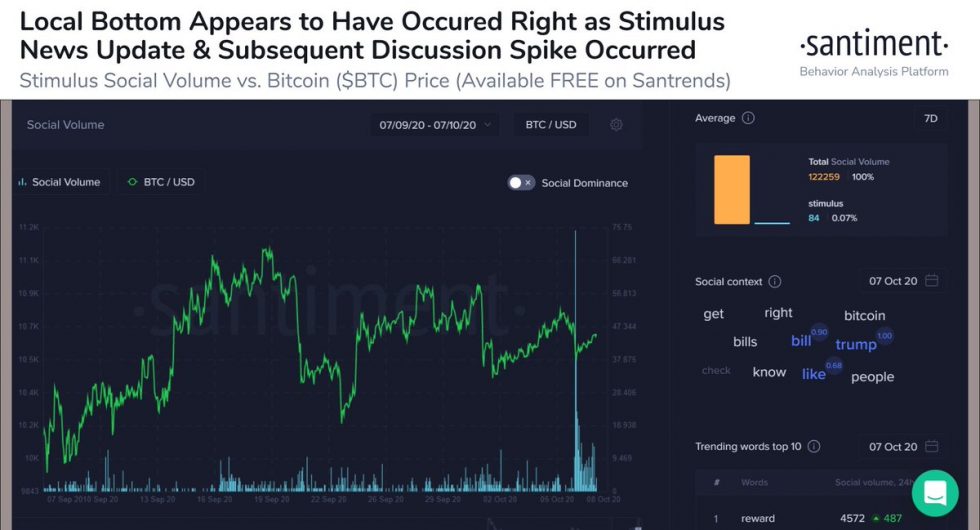 Despite not having a one for one correlation with the stock market, this data seems to reveal that Bitcoin’s near-term trend still remains largely dependent on key economic developments within the U.S.

Bitcoin Loophole Review: How legit is this trading app?: Author –