Bitcoin Has Room to Move to the Upside

Analysts think that Bitcoin will extend higher in the near term.

One analyst just shared the chart below, showing the importance of the ongoing move higher. Bitcoin breaking higher now, the chart suggests, will mean that it will soon move to test the resistance at $11,200-11,400, where the cryptocurrency bottomed many times during bearish retracements in August.

The chart does note, though, that after a rally towards that level, it could return to around $10,600. This is in line with a sentiment shared by other analysts that Bitcoin is likely in the period of its market cycle where it will consolidate for weeks on end instead of establishing a firm direction. 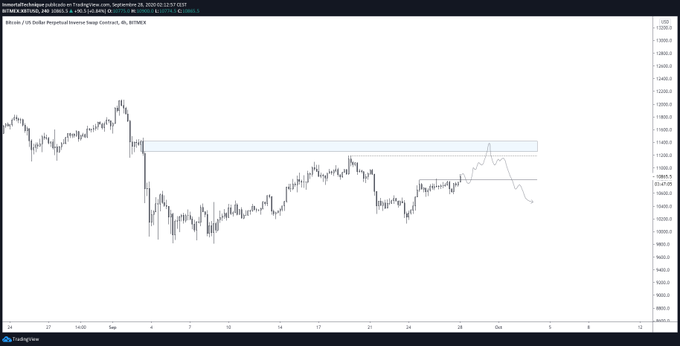 Josh Olszewicz, an analyst at Brave New Coin, just reported that Bitcoin’s one-week MACD has opened red for the first time since April. This suggests that the prevailing medium-term trend may be bearish despite recent price action to the upside.

MACD OPENS RED FOR THE FIRST TIME SINCE APRIL 20th

A correction in the medium term would align with the normal uncertainty that markets see around the time of presidential elections, along with the seasonal weakness often seen in October and November.