Ethereum has seen some rocky price action over the past few days. On Saturday, bulls stepped up and sent the cryptocurrency’s price flying up towards new yearly highs of $415.

The selling pressure found here was significant and catalyzed a deep pullback that led ETH as low as $300.

Despite recovering the vast majority of these losses, the cryptocurrency is now struggling to break back above $400 as it consolidates within the upper-$300 region.

While speaking on this topic, one cryptocurrency analyst explained that ETH’s current market structure is strikingly similar to that seen when it was trading at the bottom of its long-held range.

This may suggest that a sharp pullback is imminent in the coming days and weeks.

At the time of writing, Ethereum is trading down just under 1% at its current price of $384. This is around the price at which it has been trading at following its overnight rejection at $400.

The cryptocurrency is currently well-below its recent highs of $415, and the downtrend the rejection here sparked is having grave implications on the crypto.

One analyst also noted that Ethereum is now at risk of seeing a trend shift, as it is trading above its final key support within the upper-$300 region. 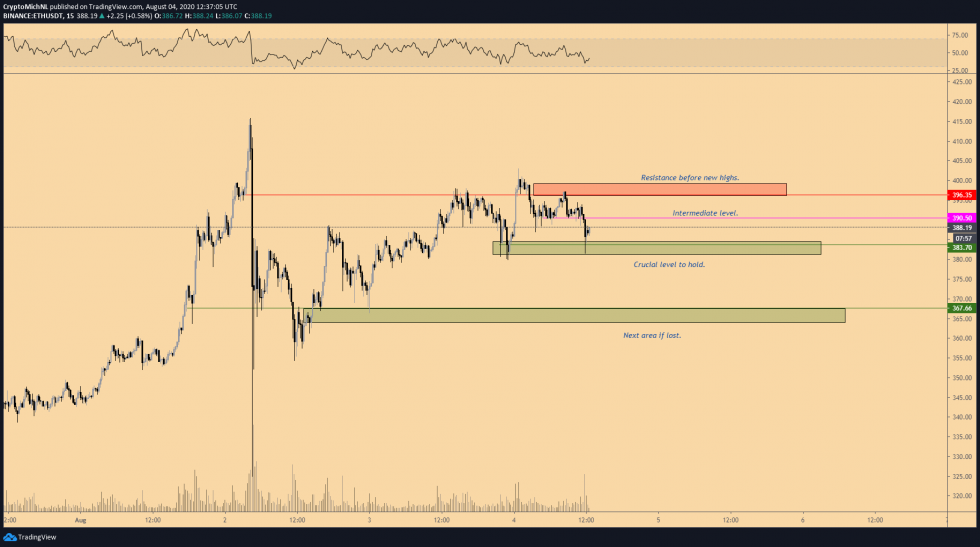 Another structure that highlights Ethereum’s potential near-term weakness is seen while looking towards the candle formed at its $400 daily high.

One analyst is noting that this candle’s striking similarities to its range-low candle could mean a retrace is imminent.

“ETH: Some further thoughts… Similar PA, simply on different sides. Taking liquidity below the support level previously and now above the resistance level with this current move.”

So far, the trader’s analysis has been spot-on. This means that the cryptocurrency may not be poised to move towards its range-lows at $367.

If the support here is lost, Ethereum could soon invalidate its entire uptrend.