A fractal in technical analysis terms is when the price action of an asset repeats over different time frames and/or for different assets. As Investopedia explains:

“Although prices may appear to be random, they actually create repeating patterns and trends… Fractals refer to a recurring pattern that occurs amid larger more chaotic price movements.”

Should the altcoin market follow the path that silver took and Bitcoin took historically, there will soon be an explosive breakout in digital assets across the board. 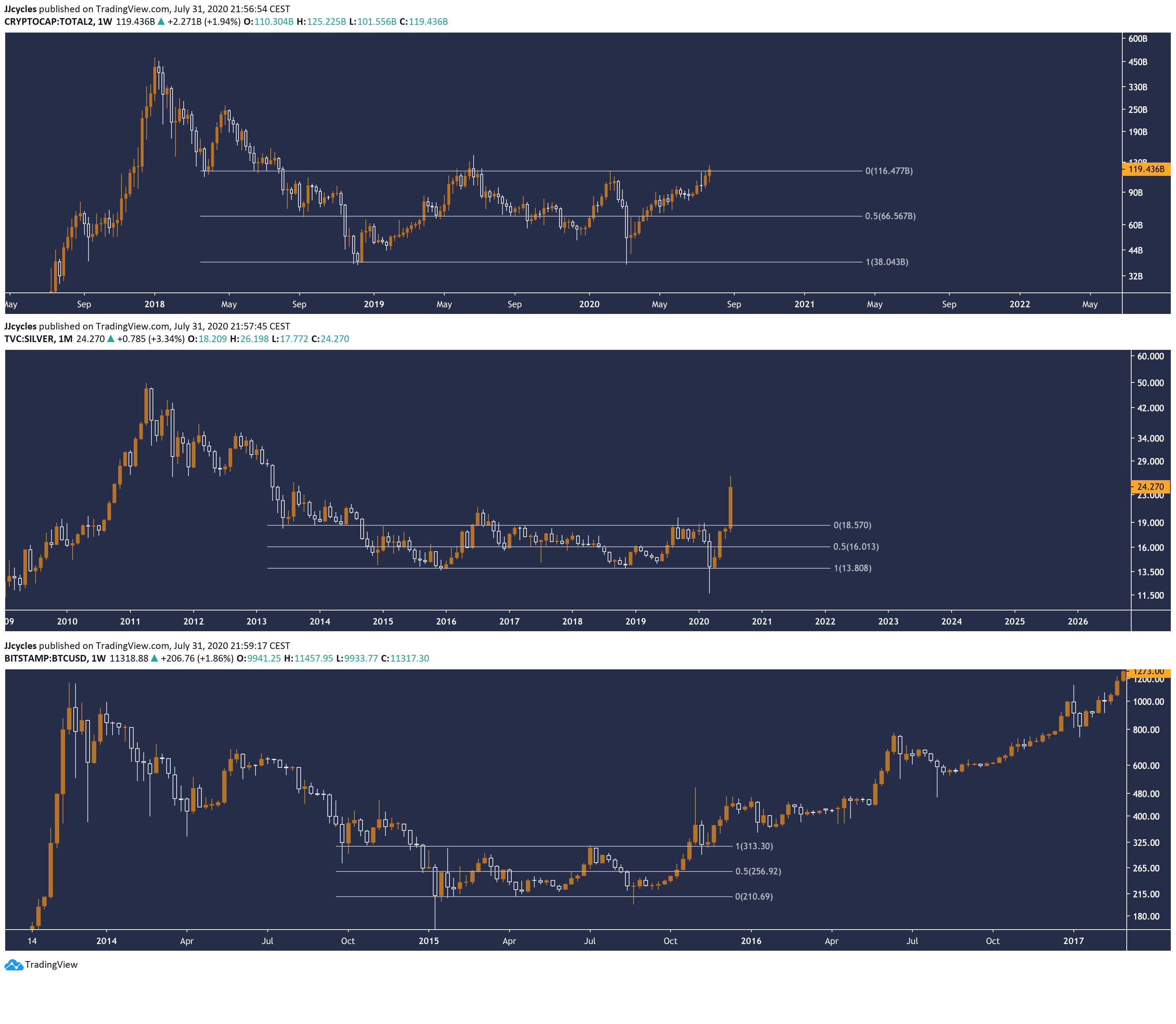 The fractal also predicts the start of a larger altcoin rally that will see this segment of the industry surpass its 2018 all-time high.

Analysts say that Bitcoin volatility could ruin the potential altcoins have to rally. Nik Patel, the author of “An Altcoin Trader’s Handbook,” said that he sees a likely scenario where BTC will continue to rally against altcoins until the $20,000 all-time high:

“Wouldn’t surprise me to see dominance now rise until BTC all-time highs (pending a confirmed Weekly breakout above $10,600) > break $20k and alts find another bottom (like Nov/Dec 2016) > they rally concurrently like March-June 2017.”

Wouldn’t surprise me to see dominance now rise until BTC all-time highs (pending a confirmed Weekly breakout above $10,600) > break $20k and alts find another bottom (like Nov/Dec 2016) > they rally concurrently like March-June 2017.

This was echoed by the head of technical analysis of Blockfyre, a crypto research firm. As reported by Bitcoinist, he said on the matter previously:

“If $BTC and $ETH start trending. I’d be cautious on longing #ALTS. Especially if this is the start of a new BTC trend upwards. The most likely out come would be alt/btc pair ratios getting drained while BTC moved past 10.5k in that scenario. I also wouldn’t look to fade 1st move.”

If Bitcoin’s volatility can suppress altcoins in the long run, though, remains to be seen. CNBC’s Jim Cramer Says That Thanks to Bitcoin He Paid Off Mortgage on His House: Author – Siamak Masnavi

Shiba Inu ($SHIB), Dogecoin ($DOGE) and Others to Be Accepted as Payment at Thousands of Restaurants: Author – Francisco Memoria