In recent months, the world has been facing the COVID-19 crisis that has changed the outlook towards the way we live. Massive quarantines forced millions around the planet to stay at home for weeks, which only stimulated their online activity. Coupled with the pause in traditional sports, it is no surprise that esports has been attracting more attention than usual especially considering that it already was a trend before the virus outbreak. The same is applicable to esports betting as well.

The popularity of LOOT.BET – one of the biggest players in the esports betting market – has doubled over the very first months of the ‘Great Lockdown’. The bookmaker not only accepts real money but cryptocurrencies as well and thus we decided to take a closer look at it. 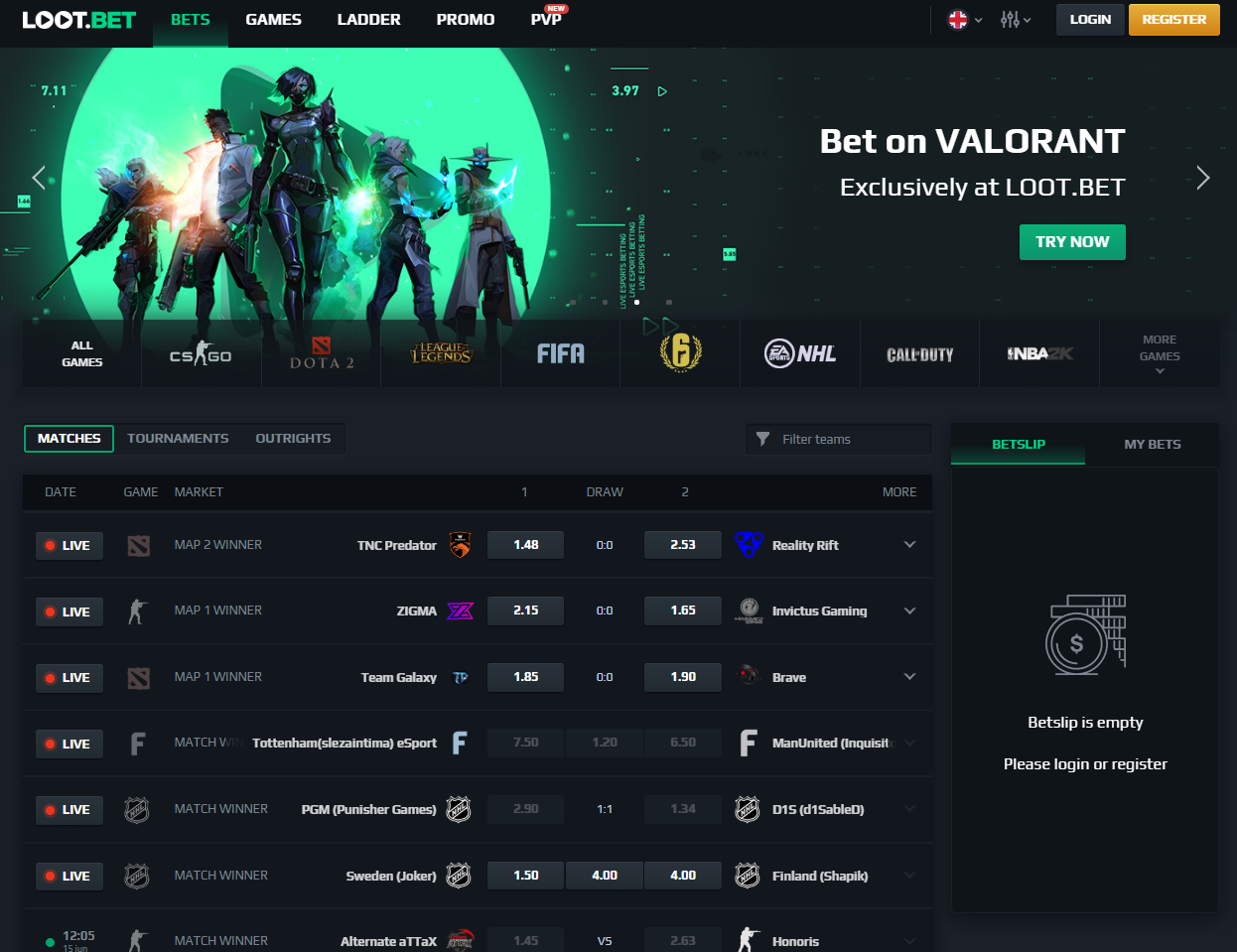 Established back in 2016, LOOT.BET is a fully licensed bookmaker, operated by Cyprus based company Livestream Ltd.

LOOT.BET provides its services across the globe, excluding a handful of countries such as the United States, Australia, France, Netherlands, the United Kingdom, and a couple of smaller states all listed on the Terms & Conditions page. The site is available in as many as nine languages: English, Spanish, Portuguese, German, Turkish, Polish, Chinese, Russian, and Filipino.

At the moment, LOOT.BET accepts mBTC and ETH plus four fiat currencies: the US dollar, Euro, Russian Ruble, and the Philippine peso. Where real money is concerned, the bookmaker supports a wide range of deposit and withdrawal options which include credit cards, Neteller, Skrill, and more. The withdrawal process may take up to 72 hours but usually, it goes much faster, especially if you use cryptocurrencies.

The first thing that comes to notice while visiting LOOT.BET is that the site interface is user-friendly – a rare feat to achieve for betting platforms – and it is immediately clear that the site is aimed at gaming fans. In addition to the desktop browser version, LOOT.BET has apps for both PC and mobile devices based on Android and iOS.

LOOT.BET provides both pre-match and live esports betting offerings for numerous titles such as Counter-Strike: Global Offensive, Dota 2, and League of Legends as well as a range of the less demanded esports titles and ‘sim sports’ as well. There you can bet on Call of Duty, Overwatch, StarCraft 2, Rainbow Six, HearthStone, Rocket League, FIFA, the recently released Valorant, and more titles.

Strictly speaking, the above applies to some other esports bookmakers but LOOT.BET has much more to offer than its competitors and that makes it not only remarkable but unique as well.

For example, LOOT.BET has a ‘theatre mode’ that allows placing live bets while watching a game, making it convenient, which live betting fans definitely appreciate.

Recently the bookmaker launched the ‘PvP Mode’ that has no analogs in the market as yet, if you consider its noteworthy players. You get a wide variety of opportunities for immediate live betting on various side markets, for example, if a team is going to destroy their opponents’ tower at an exact/present moment in Dota 2. Also, this feature allows you to bet on games played and broadcasted by famous streamers. If you are wanting to try something beyond ‘normal’ esports betting, you will definitely take a liking to this mode. 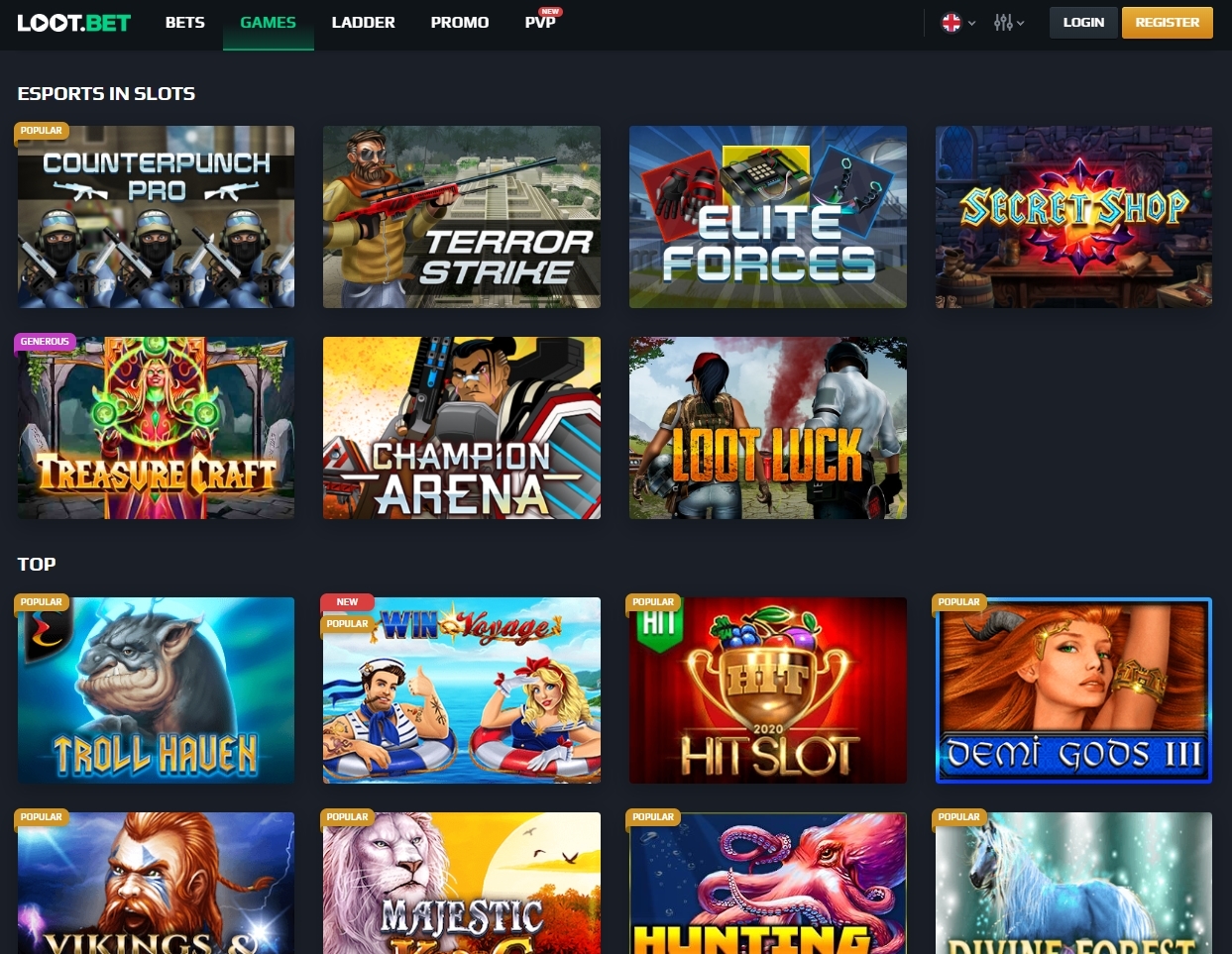 Another interesting option is the slot games. Though slots are common among bookmakers, LOOT.BET is the first esports betting platform that launched video games themed slots, related to popular titles like CS:GO, Dota 2, PUBG, etc. Additionally, the bookmaker also offers free spins for them so you can try your luck at no risk.

Now, let’s expand the topic of bonuses and promotions available on LOOT.BET.

The bookmaker constantly offers bonuses that are kind of classic for the market – like doubling your deposit; though at the moment, such bonuses are not available for ‘crypto’ users. However, there are further opportunities, one of which is known as the ‘Ladder’ where the most active users are rewarded with decent money. Just bet as usual, and the more bets you place, the higher your position in the Ladder is. There are two types of the Ladder; weekly and quarterly, with especially big prizes in the last of these. 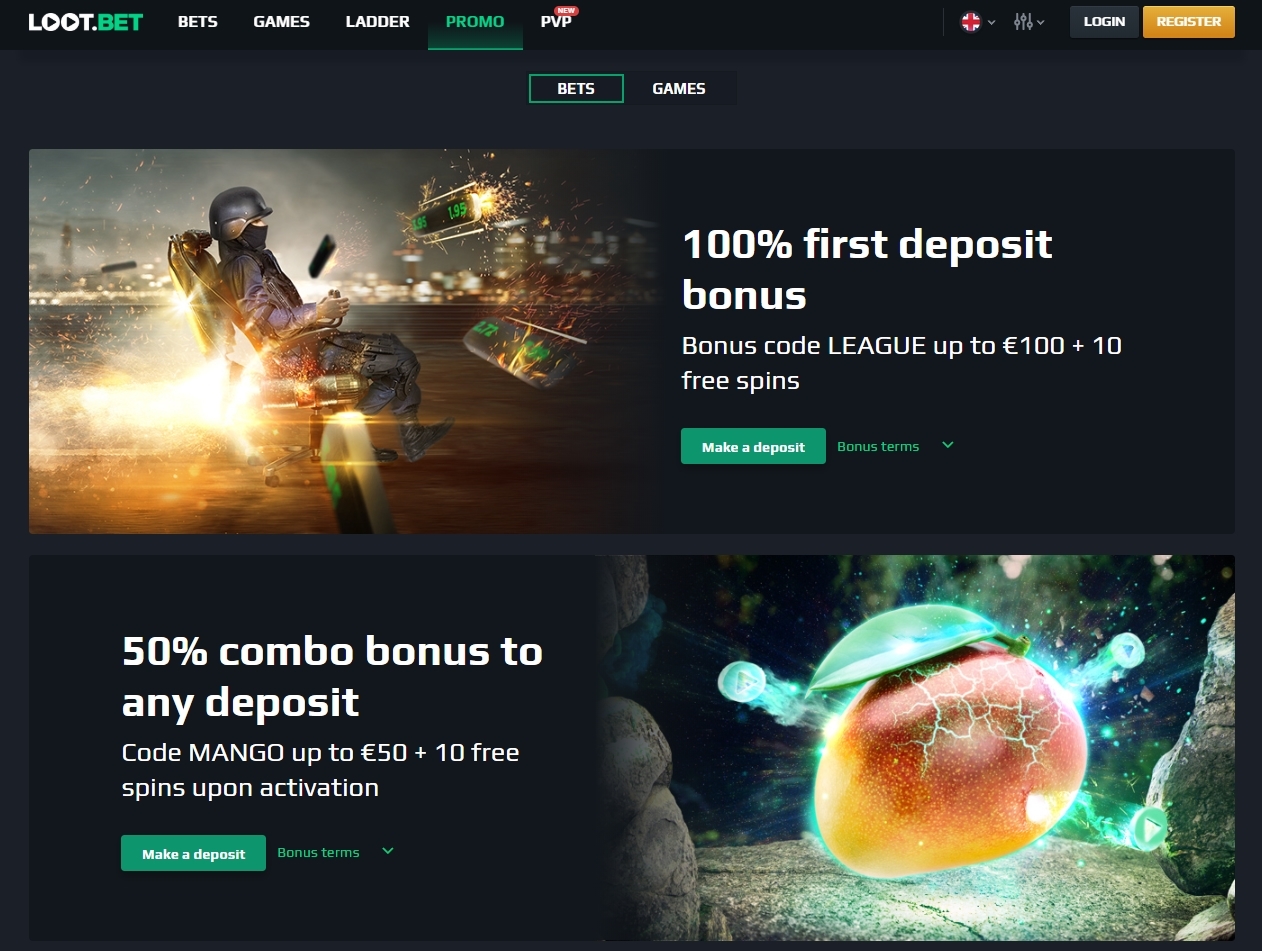 Also, LOOT.BET is one of the few betting platforms that offer the ‘Cash Out’ option. With this feature, you can reduce your risks and control your bets in case the game runs in a way you didn’t expect.

Finally, the odds on LOOT.BET are not just competitive but among the best offerings in the industry. The bookmaker’s margin is lower than the average for the market, and moreover, from time to time LOOT.BET announces ‘promo’ games for which its margin is 0%.

It is also worth noting that LOOT.BET actively supports the esports scene as a sponsor. Among its current and former partners are tournament operators StarLadder, Beyond the Summit, Maincast, UCC, Eden Esports, and WePlay!; esports teams Digital Chaos (currently known as Chaos Esports Club), Team Empire, and Sprout; the world-leading dedicated website on Counter-Strike HLTV.org and other media.

If you follow esports, you definitely must have heard about the events sponsored by LOOT.BET. Among them are StarLadder StarSeries & i-League, LOOT.BET DOTA Summit 12, the LOOT.BET/CS, LOOT.BET HotShot, and LOOT.BET Cup series, iBUYPOWER Masters IV, LOOT.BET Winter Masters, WePlay! Dota 2 Valentine Madness, etc.

Besides sponsoring tournaments, LOOT.BET has created the anticipated LOOT.BET Shows together with StarLadder and Maincast, as well as The AnaLOOTics Cup that attracted thousands of esports fans. Also, the bookmaker has been cooperating with esports influencers.

Last but not the least – LOOT.BET is an Anti-Corruption Supporter of the Esports Integrity Commission, the watchdog in esports. This means that the bookmaker is contributing to the fight against match-fixing, cheating, and other kinds of fraud in esports. Altcoins are About to See a “Capital Rotation” Event as Bitcoin Rally Heats Up: Author – Cole Petersen

A Move to $50,000 is “On the Table” for Bitcoin as Bulls Defend Key Support: Author – Cole Petersen