Lebanon is another country in the world that is experiencing what high inflation means in practice. Demonstrations took place yesterday in Beirut and other cities. Citizens of the country are desperate. They lose their savings and their withdrawals are worth nothing. This is the effect of the fall of the Lebanese pound.

Protests began in October last year. Since then, the Lebanese pound has lost 70 percent. its value. The protesters direct their rage against banks. Many bank buildings have already been burned and plundered. In Beirut, demonstrators even threw Molotov cocktails to the police. In Tripoli, stones were thrown into the army. 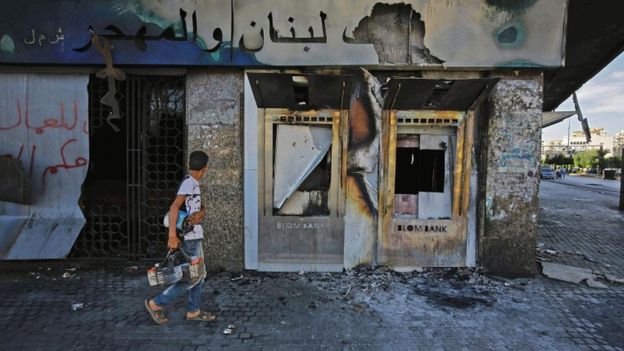 Bank in Tripoli burned by the protesters. Source: AFP

The situation was exacerbated by the introduction of restrictions on the payment of hard currency, including US dollars, by banks. As a result, the Lebanese were deprived of access to their dollar accounts, which were a rescue for them during the economic crisis.

“We came down to the streets because all that we demanded on 17 October did not get achieved. Today, the dollar has reached 7,000 Lebanese pounds. We can’t afford to eat or pay rent or anything like that. We will stay here until the dollar rate goes down and until all our demands are met.”

– told the media one participant in the Beirut demonstration, who introduced himself as Manal.

“People can’t take it anymore, that’s enough. People have no work, no food to eat. They cannot buy medicines, nappies or milk for their children.”

What are the authorities doing?

How do politicians react to this? Prime Minister Hassan Diab organized an extraordinary cabinet meeting yesterday to discuss the current situation. The government has announced that it will soon take steps to stabilize the situation. President Michel Aoun promised that the central bank would send more US dollars to the market to limit the decline in the national currency.

However, more and more facts show that the situation may get out of control and resemble that of the period preceding the civil war that broke out in 1975.

Instead of trusting the politicians to resolve the monetary problems many Lebanese are converting what is left from their savings into Bitcoin as an alternative to escape the local currency hyperinflation. Shark Tank Star To Be Paid in Crypto by FTX for Serving As Brand Ambassador: Author – Michael Lavere

Crypto Analyst Explains Why There Is a Nonzero Probability of $ETH Flippening $BTC: Author – Siamak Masnavi