One hell of a year it has been for bitcoin in 2018. Indeed 2017 have been the most successful year in the era of cryptocurrency market which saw BTC rise to $20,000; the world’s most valuable cryptocurrency is now trading near its lowest price in 16 months.

In bitcoin’s 10 year history, there have been five significant spikes in its price and the market has succeeded in recovering to even higher levels after each previous crash.  But in 2018 the scale of losses left a couple of questions on the mind of a few cryptocurrency experts, wondering if there will be a market turn-around once again.

In 2019, predicting bitcoin’s fortune has brought divided analyst, high-profile representatives in the cryptocurrency industry have made forecast aligning from a whole capitulation, to a 10-fold growth from today’s price of $3,750.

According to Mr Ayre’s prediction, in 2019 bitcoin will be totally worthless and fall to $0. Mr Ayre predicted that another cryptocurrency which is more technologically inclined and has a better useful purpose as an actual currency such as the bitcoin cash will take the place of bitcoin.

Mr Lee on the other end of the scale, whose wildly optimistic prediction about bitcoin last year has been proven wrong. He has forecast that by 2019 bitcoin could peak at $36,000.

There is still optimism  about bitcoin that it will be the leading cryptocurrency that leads a general progression of the blockchain and cryptocurrency  industry.

Blockchain adviser Oliver Isaac said there is no better time to purchase bitcoin than now. The surrounding infrastructure of bitcoin has never had a better look with huge traditional financial institution stepping into the market along with the likes of Circle, Coinbase and Blockchain. Misha Libman, co-founder of blockchain art laboratory Snark.ark, shared a sentiment which placed the volatility of bitcoin’s price down to the incipiency of the industry.

Bitcoin is a new asset and a new technology that we are dealing with, it is highly speculative and anyone can guess the motives for its rise and fall. Notwithstanding, cryptocurrencies and blockchain is a part of the future  and the hiccups we are seeing today is what we will have to put up with for some time until cryptocurrencies are used to buy sweets.

About Kenneth George 1 Article
Hi, my name is Kenneth , I am a professional freelance writer and love to create attractive and topical content; especially on financial market subjects. I have been writing for over 5 years for a variety of publications. I've followed the development of blockchain technology since Ripple's creation in 2012, and being an active cryptocurrency investor, I've gained extensive knowledge of the topic.

Thomson Reuters, the global media giant, has launched a startup incubator in Zurich, Switzerland to host early stage entrepreneurs involved in crypto technologies. Through the Incubators which will happen in Thomson Reuter’s labs, the startups […] 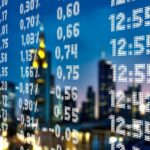