While every market commentator likes to open up their commentary with a bang, sometimes that just isn’t possible. It probably makes sense in this, my first article, to discuss a little about my approach.

I’ve successfully traded stocks for many years using, as my primary indicator, the Dow Theory. This has served well in determining when to be in the market and when to be out (or short in my case as I am quite aggressive in my style). About 6 months ago I started experimenting with a version of Dow Theory applied to bitcoin. In particular I have adopted the idea of confirmation between BTCF and LTC as a prime tool in my arsenal. Now clearly Bitcoin is more volatile than the US stock market (now there’s an understatement for you if there ever was one) and Litecoin makes Bitcoin look positively tame. This has required some significant of the key elements of Dow Theory (so anybody who is a strict Dow Theorist – apologies in advance). Key elements that I have adapted are:

I have found the early results encouraging and though I would share the ongoing results as a regular weekly series of articles in Digital Finance News. I will try and make sure any entry or exit levels are clearly defined ahead of time so the article will always focus on the forward entry and exit levels as well as commentary on the previous week. This should allow interested readers to keep their own records, and maybe use the techniques if they find them useful.

One final thing before my first weekly commentary – please provide feedback, good or bad, and also identify where you think the approach could be improved. I am more than happy to enter into the debate and maybe we will get a better approach out of it. So week 1. As I said in my intro, we are in a holding pattern at the moment. Short positions were closed out on 2nd May; this was when both coins had confirmed a break above the previous high reference point. This has not resulted in a long position because both markets has a downside extension on the previous secondary low so we were not able to make a confirmed reversal call, just a go flat, wait and see.

Moving forward we have an interesting situation developing. The Bitcoin market has a secondary high in place at 244.50, made on 8th May (remember we use close prices only, not the high of the period). This has been followed by a potential secondary low at 231.7 on 19th May. This sets us up nicely for a long position … except for LTC. LTC has massively outperformed the last few days and, paradoxically, this has not created the same setup situation. With the LTC move from 1.4 to 1.9 we now need to see acceptance at this new level before moving higher (which will require at least a week). So for our first week it is, unfortunately, wait and see.

BTC needs to break and close above 244.5 for a partial signal but this won’t be confirmed until LTC has held these levels for a week, established a new secondary low then broken new highs. 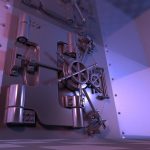